In this blog post I will be detailing an interesting case of dampness within a property and explain how it was resolved. Often with any dampness survey it is a process of elimination by where you go through and rule out each possible cause looking at the property holistically. As Prof. Malcolm Hollis stated “Surveying buildings is an art, verifying the cause of failure is a science”. I use this particular example because this shows some process of elimination. It is by no means the most complex of dampness cases but it does show the steps involved in investigating these issues.

The property being surveyed was a 2 bedroom semi-detached dwelling. The external walls were of a brick cavity construction. The building has a tiled pitched roof with uPVC rainwater goods. Windows are timber frames with double glazed units. The heating is a high efficiency gas central heating combination boiler which was recently installed at the time of the survey.

The neighbouring property had condensation issues in the past which had been verified by a data logging survey. The main contributing factors in that case were lifestyle and ventilation but with some advice and a replacement bathroom extractor fan we were able to rectify the issue. With this in mind I suspected that condensation could be a likely candidate although a holistic survey would still be needed.

There were some factors to indicate condensation could be a possibility here as well as the tenant owned a multi person fully fitted sauna in the upstairs bedroom. The sauna itself may not cause excess humidity but the presumption would be that the tenant would be using their shower more frequently on account of the usage of the sauna. I noted this as a point of interest and moved on.

There was a level access shower in the property and the extractor fan was in a working condition. A simple way to determine if the extract is working is by holding up a piece of toilet paper and if the extract pulls the paper on to its surface you will know that it is ventilating. There is specialist equipment available to determine exact flow rates such as the Testo 417 Vane Anemometer but this was beyond the requirements for the initial survey.

There was no signs of mould growth in any of the rooms and the tenant stated that the heating was used frequently and I could confirm the property was fairly warm. The damp seemed to be mainly in the downstairs electric cupboard which ran underneath the stairs.

I used a moisture meter (Protimeter Mini) to test the skirting and walls within the electric cupboard. After profiling the wall, the readings were found to be very high at low level as shown in the below picture. The type of readings obtained suggested to me that condensation was an unlikely primary cause of the dampness and the mould that can be seen was more likely a secondary consequence of an underlying issue.

The tenant had already called out the our main contractor previously and anti-mould paint was applied as can also be seen in the picture but the mould had managed to re-establish itself on the wall.

When you use an electrical moisture meter in a plasterboard wall it will say the reading you get will be the wood moisture equivalent (WME). In the likes of plasterboard or masonry you can only use the readings found as an indicator to determine a pattern of potential dampness rather than a definitive finding as there are a number of things than can lead to a false reading. In this case it was clear that there were high moisture readings present in both the skirting and wall.

The next port of call was to remove the tenants laminate flooring and open up a section of the floor. When the flooring was removed it was found that their was a standing level of water of a couple of inches in depth so we knew we had some sort of leak on our hands. The pressure of the boiler was not reducing so we could rule that out as a source for the water.

The tenant needed to then be decanted to allow our contractor to remove the flooring and trace the leak. The floor was a solid concrete base with timber battens which held the ply sheeting, with insulation between each of the battens. The pipework ran between these layers. The horizontally placed battens segregated the water which prevented it from making its way through to the neighbouring property.

The leak was sourced to the kitchen drainage which had a long standing leak which had slowly over a period of time flooded the flooring. The source of the leak could then be fixed and the rest of the remedial works completed. New battens, insulation, flooring and skirting were fitted. 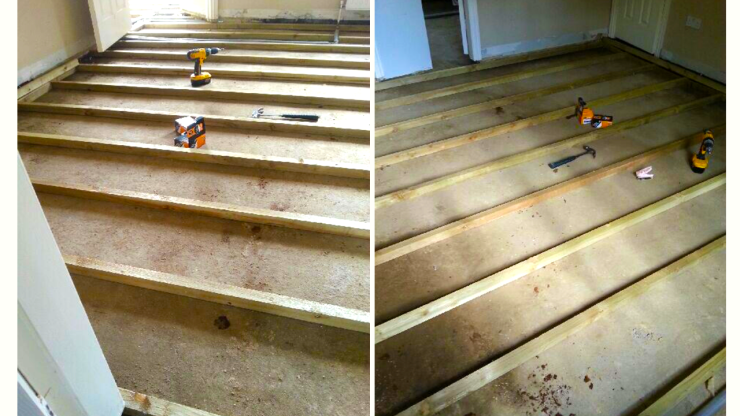 Hopefully this example shows how by process of elimination the root cause of dampness in buildings can be found. Patients and careful investigation is key in some of the more complex cases.

Although the source of the dampness was successfully found, other technologies could have assisted my initial investigation. A pinless moisture meter like what can be found in the Protimeter MMS2 would have also been useful for this case. This would have shown high levels of subsurface moisture underneath the livingroom and kitchen flooring which would have assisted in confirming my suspicions of where the water was eminating from.

The hygrometer function of the MMS2 could have thrown up some interesting results as well and would have confirmed that the property was well heated although the relative humidity may have been quite high especially downstairs.