If you follow up the shoreline from Greenan Castle you can find Dunure Castle. This castle is a little easier to get to than Greenan Castle and has been refurbished to make certain parts of it accessible with great little metal inscribed information plaques giving a history of the site. The castle sits high atop a rock on the shore about seven miles south-west of Ayr which would have given it a defensive advantage from the sea.

There is car parking close by at the harbour where there is a nice little coffee shop which you can stop at to replenish the energy after taking a good walk around the castle. See below for the drone video overview of the site.

You can see that the structure is divided into two areas, the older irregular shaped castle atop the rocky terrain and the lower level off shooting structures constructed later on. Where the metal stair case has been provided to allow for limited access to the structure, there would have been originally a wooden stair with a draw bridge arrangement at the top which would have spanned a narrow gap with a 17ft drop.

New structures and a curtain wall were added to the original castle over time. The new structures included a kitchen range, a chapel, living accommodation, a great hall and a prison. The prison was used as the Ayr town prison in the sixteenth century.

In the same vein as Dalquharran Castle, Dunure Castle was acquired by Sir Thomas Kennedy of Kirkhill and the castle has been in the possession of his descendants ever since.

Based on the archaeological findings from the 1999 investigations carried out for the Strachclyde Building Preservation Trust the history of the site was found to be as follows:

From the video you will catch glimpses of a separate circular structure which is a medieval dovecot containing around 200 nesting boxes. It stands just beyond the walls of the castle and has managed remain particularly unscathed and is one of Scotland’s finest examples. The building would have supplied the castle with eggs and winter meat.

One of the plaques on site states the following “Excavations in the 1970’s revealed parts of the great hall on the level above the vaults. This magnificent chamber was heated by a fireplace some 10ft across in the north wall. Tall windows lit the hall to the south and west, the latter affording extensive views to Ailsa Craig. Beyond the hall to the north, further apartments may have served as offices of administration. The floor above contained the spacious private apartments of the family.”

From the 17th to the 19th century the castle was carefully and systematically dismantled over time for any recoverable building materials such as slates, timber, sandstone dressings, glass and lead. This is why the structure looks so dilapidated and ruinous. It is likely local buildings on the harbour and the likes of Dunure mill was constructed from castle stone.

If you enjoyed this blog feel free to subscribe via email to get the most up to date posts. 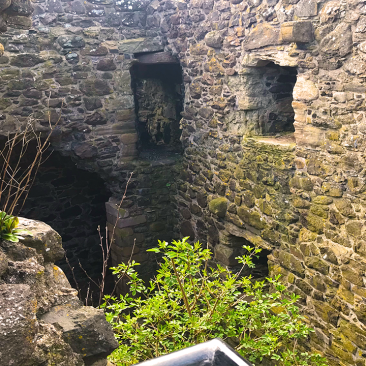 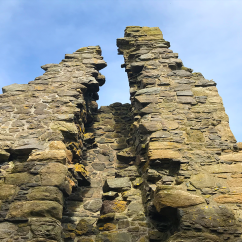 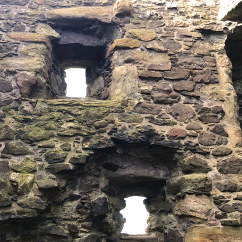