In this blog I am going to be talking about my experience with the DJI Mavic Mini and explore whether this drone is the right choice for me.

I have been looking into buying a new drone for a while now, I have flown a Parrot Bebop 2 and a DJI Mavic Pro in the past so with that in mind I was not sure where to go next. My friend purchased a Mavic Mini so I decided to give it a test run to see whether this cheaper drone would work for me.

I mainly use drones recreationally to capture old castles and abandoned buildings as well as landscape shots when I venture out somewhere nice. I need a drone that is going to be able to have a decent connectivity and good picture quality, so the Mavic Mini with its capability f recording 2.7k footage had some potential here.

The drone looks great, I love the Mavic design from the Mini right through to the Mavic 2, DJI have perfected the look.

This drone is also certainly lightweight! The battery weighed in at 99g and the body of the drone weighed 149.1g. literally any attachment or add on will take you over the 249g weight if that is something that you are trying to stay under. As a consequence this drone felt quite fragile which is bourne out by some having issues with the Mavic Mini’s propellers hitting off the drone body due to the flexibility of the arms.

This issue does have a fix in the form of fitting prop mounts which ironically will raise the weight above 250g. This weight limit is important for those in the US as anything under 250g they do not need to register. I didn’t find this to be a problem when I took out the drone but I did take note of the fragile feel of the drone.

The drones propellers reminded me of those little handheld battery fans you get on holiday to cool you down. They felt quite flimsy and I don’t think they would take much punishment at all. As the drone is super small, this also means its super portable. I was able to fit the drone and remote inside my camera bag alongside my Canon M50 and lens.

The remote is very similar to what I was used to with the Mavic Pro minus the screen. There is only one point for charging the remote and connecting the phone which took me off guard at first as I was looking for a separate point to put the charging cable. The remote feels solid enough and it has removable thumb sticks which is handy and was a feature that was lacking with the Mavic Pro. 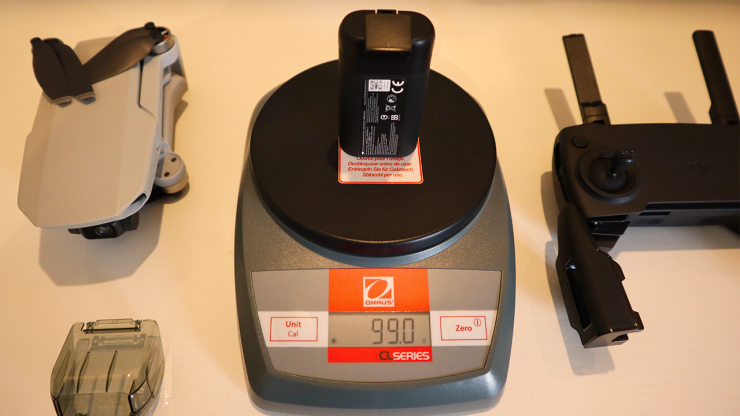 First I needed to find a flat piece of ground, as I was out in local fields the grass was going to cause me problems as the Mavic Mini’s body is so close to the ground. This is where a cheap landing pad becomes invaluable. I eventually managed to find a nice spot and I was off.

I took the drone out over two days as during the first day there was a bit of wind that disrupted my flying. The thought never crossed my mind as to whether I would be able to get the drone back when flying in windy conditions but this was suddenly a concern with the Mavic Mini.

I flew the drone out over a field and I was struck with the high wind warnings as I didn’t feel the conditions were that bad. It certainly wouldn’t have been windy enough to cause any issues with my old Bebop 2 or Mavic Pro however these are heavier drones. I received a notification saying that the drone would not make it back to me if I were to hit the come home button. This was really concerning (especially as the drone was not mine) so I turned it back straight away.

The second issue I ran into was the signal, the drones signal was noticeably weaker than what I had been used to flying previously. This meant that I found myself paying more attention to the phone screen with the frequent notifications of wind and signal rather than the drone itself.

When the battery got below 25% it gave me a low battery warning as expected along with quite an annoying loud beeping sound. What I didn’t expect was for the drone to put itself into go home mode which automatically raised the height of the drone. This must have been a setting that my friend had chosen when setting up the drone. When the drone raised in height it lost signal and then gave me a notification to say it couldn’t make it back. The signal returned pretty quickly then I was able to turn it back on to manual fly mode and bring it back safely but that was my second scare of the day so time to take it home and come back when there was less wind. The second day was a much more pleasant flying experience as there wasn’t much wind at all. I was able to check out the Quickshot mode which was really fun and would be great for taking interesting holiday videos with the family. I don’t think I would use this function when capturing footage of castles as I like to have full control. I don’t believe from what I have saw online that this feature would be any good at this anyway as its more geared towards tracking people.

All of the quickshots seemed to work really well and the drone only lost tracking with me once. My favourites were the ‘rocket’ and the ‘circle’ quickshots which I think have the ability to create some nice cinematic shots.

I took the drone back home and looked through all of the footage it had taken and I was really impressed with how it looked. The video was really stable and clear and looked as good as if not better than what my Bebop 2 could have produced.

This drone is good for beginners and for people who want to take some fun holiday snaps. It is also advantageous in terms of the new drone regulations that are going to come into force in the UK, due to its weight there will be more flexibility in terms of where you can fly it.

However for me this drone was not going to hit the mark. The wind resistance was a major issue for me, if I drive a bunch of hours out to a rural location I need to know the drone is going to be reliable if the wind picks up a touch. The signal strength was not good enough for me nor was the feel of fragility. I don’t plan on crashing the drone but I feel like if I was a bit rough on the drone in transit I could accidentally cause it some damage.

I am glad I did fly this drone as the price point makes it very tempting for a hobbyist. After flying I decided to go for the Mavic Air 2 which I will discuss further when it arrives. From looking at initial videos on the Mavic Air 2 it looks like it will tick more boxes for me.